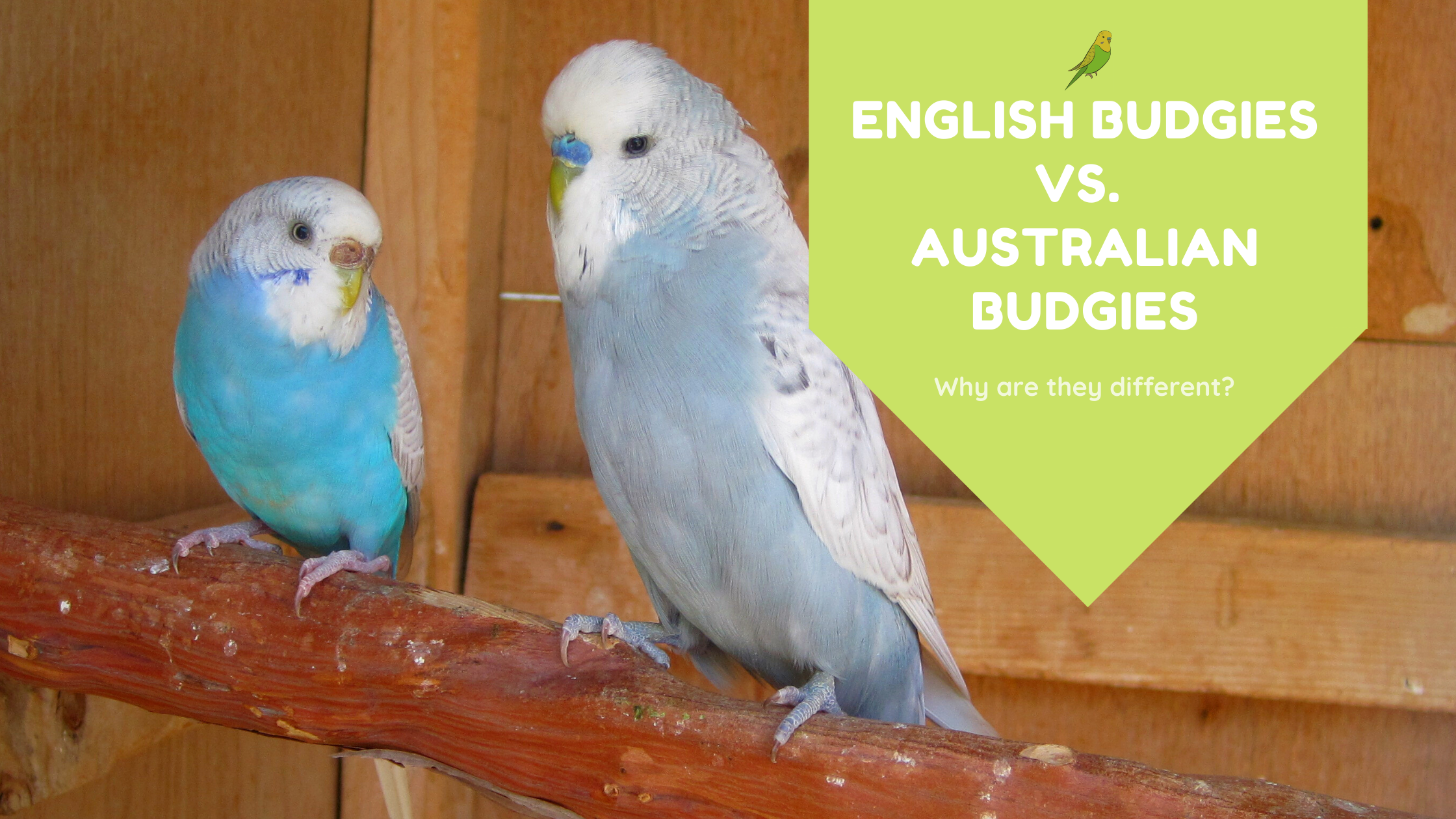 By All About Budgies Last updated Jan 20, 2022
0
Share FacebookTwitterGoogle+ReddItWhatsAppPinterestEmail

Budgies, or parakeets as they are known in the United States, are a popular breed of parrot and are widely known and kept as pets across the world. While they are native to the drier areas of Australia, a number of varieties of budgie exist today as a result of human intervention. This has resulted in variations in plumage, size, as well as given rise to certain mutations. This article will detail the difference between two popular varieties of budgie- the Australian variety and the English variety (also known as the show’ or exhibition’ variety).

English and Australian budgies share many of the same characteristics. In appearance, the two varieties appear to be very similar. The main difference between these two varieties lies in their size, plumage, head shape, and behavior.

Besides color, Australian budgies have sleeker-looking feathers while the English variety are typically much fluffier in appearance. The fluffy plumage in the English variety results in another difference in appearance between the two varieties- the head shape. While Australian budgies appear to have small, sleek heads, English budgies appear to have larger heads and sometimes beards’ around their chin, owing to their fluffy plumage. This also has the effect of English budgies having partially covered faces due to their feathers.

Finally, a difference between these two varieties can be found in their behavior. While all budgies tend to be playful and curious birds, English budgies tend to be quieter and calmer than their Australian counterparts. They also have slightly deeper chirps.

Despite the differences between these two varieties, all budgies belong to the same species. This means that any budgie variety can breed with another, but the chicks resulting from the combination of these varieties tend to be slightly larger and calmer, therefore taking after their English parent.

Budgies originated in the dry interior regions of Australia, with all subsequent varieties being descendants of this original wild variety. Budgies thrived in this region for thousands of years and became a source of fascination for early European settlers in Australia. As a result, they became popular pets and spread to other parts of the world. Budgies were selectively bred in order to achieve certain desirable traits, with some bred selectively to achieve larger birds, specific colors or patters or even to achieve particular behavioral traits.

The breeding of budgies with these traits with other budgies that possess the same qualities results in the creation of a variety. This is how the English variety of budgie came into existence and continues to be a popular variety across the world.

Some mutations occur within English budgies and other types of budgies as a result of the selective breeding process mentioned above. The most common of these are color mutations. There are around 32 primary mutations in budgies, with rarer colors resulting from the combination of two or more of the existing primary mutations. This is commonly seen among English budgies but can also be found in other pet budgie verities which are more closely related to the original wild Australian budgies.

There are also some rarer mutations which include opaline, rainbow and pied varieties.

Regardless of which variety you choose, budgies make for great pets and require the same level of care. Each variety can also be trained in the same way and both varieties have equal speech and trick learning capabilities.

What Do I Need To Know Before I Purchase My New Budgie?

This website uses cookies to improve your experience. We'll assume you're ok with this, but you can opt-out if you wish. Accept Read More